Pools, golf and luxury living: why retirement homes are taking inspiration from the USA 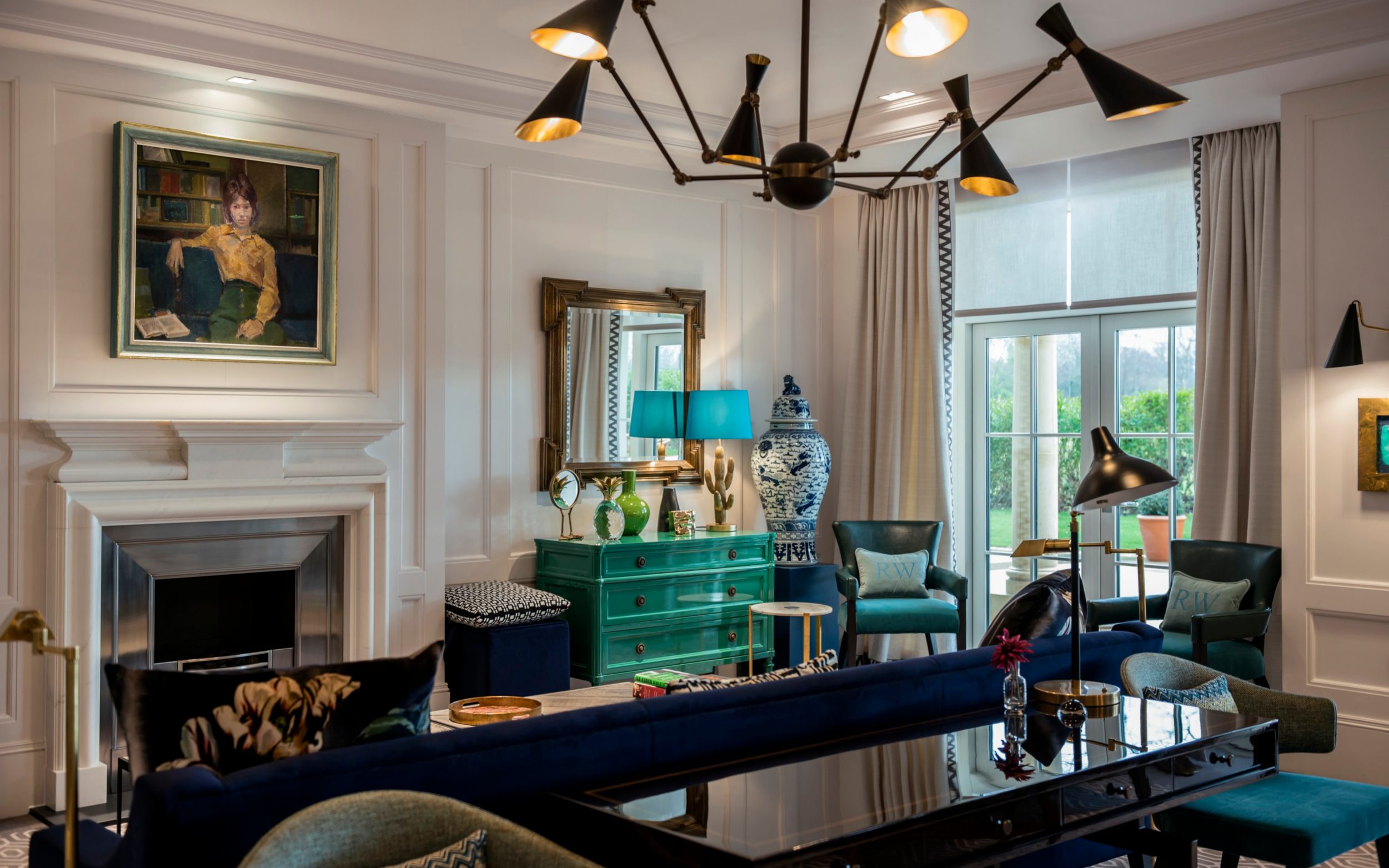 The American retiree lives in a different world to his UK counterpart. If he owns a home in The Villages, a retirement community in Florida, his daily chore will be ­deciding which of the 65 swimming pools to choose from, and which of the 46 nearby golf courses.

And instead of settling down to an episode of Midsomer Murders after dark, he may be line dancing in the village square until midnight, or growing old disgracefully, cruising the high street with his chums on a pimped-up Harley-Davidson.

Many age-restricted communities, as they are called in the States, are the size of small cities, covering several square miles and bursting with entertainment centres, sports complexes and shopping emporia. Some even have their own police forces, ambulance teams, churches and Walmarts; census data show that The Villages is one of the fastest-growing cities in America.

There is a huge gulf between Britain and America when it comes to retirement living. According to Savills, about one in 200 people aged over 65 live in retirement homes in the UK, compared to about one in 18 in the US.

This disparity is partly due to the fact that over the pond there is more of a culture of retirement villages, and they have been building them for a lot longer: one of the earliest, vast, campus-style villages was built in Arizona in 1960.

British developer Elysian ­Residences is building two developments in London, and has partnered with US retirement operator One Eighty. American-born Gavin Stein, whose grandparents live in a retirement community in California, is chief executive of Elysian. His plan is to shake up the UK retirement model and introduce some US-style features. The art deco Landsby in Stanmore, for example, has a New York apartment-style entrance and double-height lobby.

“Retirees want a hospitality-led offering,” he says. “Our job is to make dreams come true – and try to make things possible for our owners.” Conversely, anything people don’t require they won’t see. For example, the medical desk, care station and even walking frames will be kept out of sight.

An American architect will work alongside a British one to ensure there is a good “UK translation” of the American features, which will include a hotel-style concierge desk, cooking masterclasses in a theatre kitchen just off the restaurant, and state-of-the-art golf simulators

Its other scheme, The Oren, will be in Hampstead, and since Elysian’s schemes won’t be on a vast campus, it will be looking for partnerships with golf clubs and leisure centres to try to create that big feel of US developments.

An American architect will work alongside a British one to ensure there is a good “UK translation” of the American features, which will include a hotel-style concierge desk, cooking masterclasses in a theatre kitchen just off the restaurant, and state-of-the-art golf simulators where you can play on 21 of the world’s top courses. There will also be a special fitness programme imported from the US called Prime Fit which includes a circular disc designed to improve balance and prevent falls.

“The US has the luxury of having more land space, but we will be building smaller communities here and using space creatively,” Stein explains.

“We will have a medical desk, and an expert on site depending on the specialities needed, while also creating business centres for any owners who still work, if required.”

However, the restaurant and spa facilities at Landsby and The Oren will not be open to the public. Nick Sanderson, the boss of Audley Villages, claims it’s different for his company: “We are more connected and integrated into the local community.” Its portfolio of urban retirement developments is growing fast and they’re getting bigger too – its largest village is the newly opened Audley Redwood in Bristol, which has 155 properties.

Its new Mayfield development will have 250 homes and a mini-mart. But this is miles away from Sun City: a Florida retirement home that extends 16 sq miles and has its own police force, a computer lab, 10 clay tennis courts, a theatre, volleyball courts, an RV (recreational vehicle) travel club and even a British Connection club. Not to mention pools and golf courses.

Unlike Stein, Sanderson is wary of adopting lots of American-style features. “We are very different from the Americans,” he says. “Our buyer is well travelled, they know what they want. They don’t want to be disconnected and stuck miles from anywhere in a huge, gated complex.”

British housebuilders have recently been cherry-picking the best features of American retirement developments since they started creating village-style developments in the Nineties.

Now British developers claim to have taken the lead in adapting the US model: some operators argue that they are not stuck following a formula that has rendered some American retirement villages old-fashioned, too big, disconnected, and too restrictive on access. “We have taken the American model and improved it,” claims Sanderson. “We have restaurants and health clubs, but have opened them to the local community.” An example of this cherry-picking is the first music festival to be held in the grounds of a retirement community. Inspired Villages put on the show this July in Warwickshire.

Headlined by the Amadeus Orchestra and Jonathan Ross’s chat show house band, 4 Poofs and a Piano, the event, Parkfest, attracted all generations to Great Alne Park retirement village. “The facilities that we provide in an Inspired Village can be enjoyed by all generations,” says James Cobb, the sales and marketing director.

Our buyer is well travelled, they know what they want. They don’t want to be disconnected and stuck miles from anywhere in a huge, gated complex

“The Parkfest was definitely multi-generational. Our pools, gyms, bistros, cafés, woodland walks, and lakeside remote model boats are designed to be enjoyed all age groups.”

He adds that British villages are acquiring more similarities to US ones. Inspired, which runs several retirement villages across the UK including Gifford Lea in Cheshire, has even launched a “Well-being Navigator”, an American concept that monitors owners’ care needs.

“We are probably seeing villages in the UK becoming more like the US, where, especially in Florida, they have been very focused on recreation,” says Cobb. “We probably lead the US in terms of care provision for ageing residents, which is now becoming an increasing focus over there.”

Unlike the UK, American retirement home providers haven’t had such a problem persuading older people to move into developments with shared facilities. This is partly due to the fact that they have had a “condo culture” for decades, and people have been used to living in managed environments, whether it is a historic, doorman apartment block, or a gated scheme with a pool and gym.

Owner-occupied retirement housing represents 17 per cent of the total housing stock over the pond, compared with just two per cent in the UK. And some 12 per cent of the US retired population lives in some form of purpose-built community – increasing to 30 per cent on the West Coast.

One big difference that remains is that British retirees want to downsize to fewer rooms in spacious low-maintenance apartments, whereas it is not uncommon for the American retirement property to be a sizeable detached home with a double garage.

But there has been a marked shift in the American model, too, with more operators focusing on building smaller communities in urban areas and providing care. MacKenzie Place in Fort Collins, Colorado, is a small scheme of one and two-bedroom apartments with the usual recreational facilities. But it also includes “brain fitness” classes, a continuing education classroom, chapel and meditation space. At Fairwinds in Redmond, near Seattle in Washington, there is a cinema, memory exercises through BrainHQ, and services such as personal shopping.

UK providers are also converging with the US by offering a variety of payment options on new homes including shared ownership, part-buy/part-rent and rental. At the top end, the American country-club lifestyle theme has been adopted by London-based Auriens. The retirement “village” in Chelsea offers owners who choose a £3 million-plus property an Aston Martin mobility scooter, Bugatti stairlift and restaurant menu offering caviar and lobster.